TLDR: Worked for 10+ different companies, attended lots of hackathons, attempted to build 30+ different side projects, became a competent developer and increased my salary by more than 5x. Jump to lessons learned or continue reading for the chronological order of most important events.

This year I will write my closing thoughts as I think I hit a significant milestone in my life and I think it’s a time to look back and see what I went through on my web development journey since I started doing web dev at the age of 13. 1 paragraph per year.

10 years ago I was just experimenting with web technologies - PHP, HTML, CSS. I modified content management systems (CMS), watched videos of people code and played copy/paste warrior with StackOverflow. My first webpage was based on a modified CMS for a gaming clan, and I was dreaming of building my own matchmaking service (we used IRC to find CoD2 matches) - 10 years later I am working on this kind of service, but more about that later…

9 years ago I released my first project to the public, with that I mean it wasn’t just something I shared with friends but something I posted to thousands of people to see. It was a web-based game a mix of Travian and other similar games we were playing in 2009. It’s what really hooked me up with development. Seeing people react.

You can probably see where I am going with this… 8 years ago I took game development to another level, I learned the basics of OpenGL and SDL and distributed my simple game to a couple of friends. I realised the accessibility of the web is what makes it really special and that’s where I wanted to continue.

In 2011, 7 years ago, I was in my second year of computer science oriented high school. I think it’s the first time I actually used Linux[1] as my desktop and played a ton with servers and networking. With my classmates, we also had an amazing opportunity to work in Ireland for a few weeks thanks to our fantastic teacher[2] who arranged all of it. I got familiar with English-speaking working culture and saw it wasn’t that different from Slovenian so I got lots of confidence I can in the future work in UK/US. 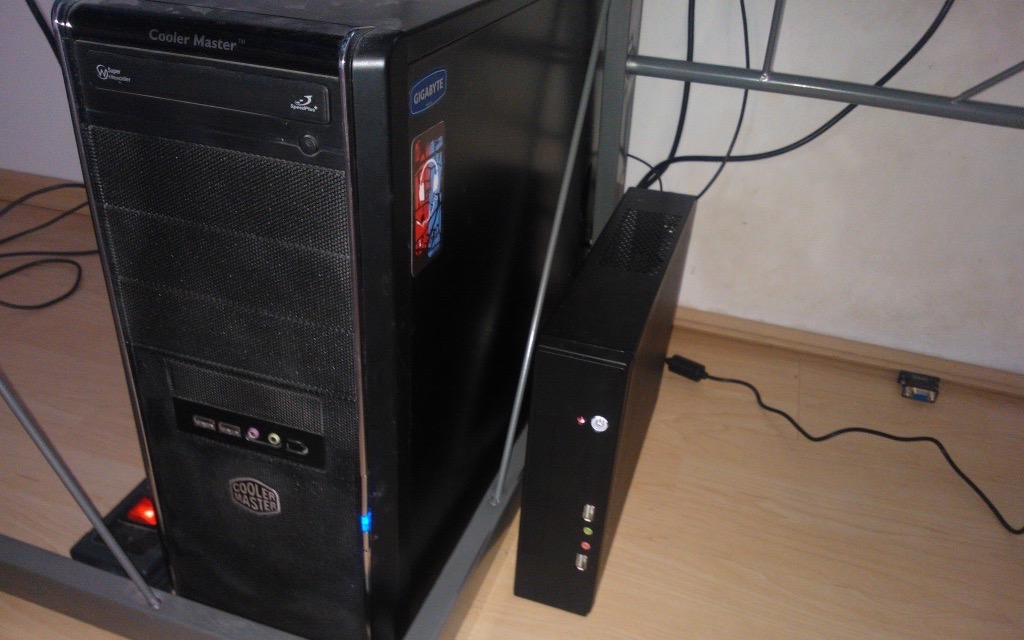 My workstation and my first server

6 years ago it was an intense year and probably deserves a blog post on its own. I worked for 2 different companies, part as necessary schoolwork practice and part my personal incentive to work for a local startup[3]. 2012 was spiced by winning some CS competitions and by participation in local hackathons. With my friend, we also managed to get selected for Slovenian startup incubator. We didn’t manage to release a product or make a successful company due to lack of experience (we were 17 and 16 at the time!), but I learned a ton about project management, company ops and general startup thinking… I’m really thankful for all the experiences that year. 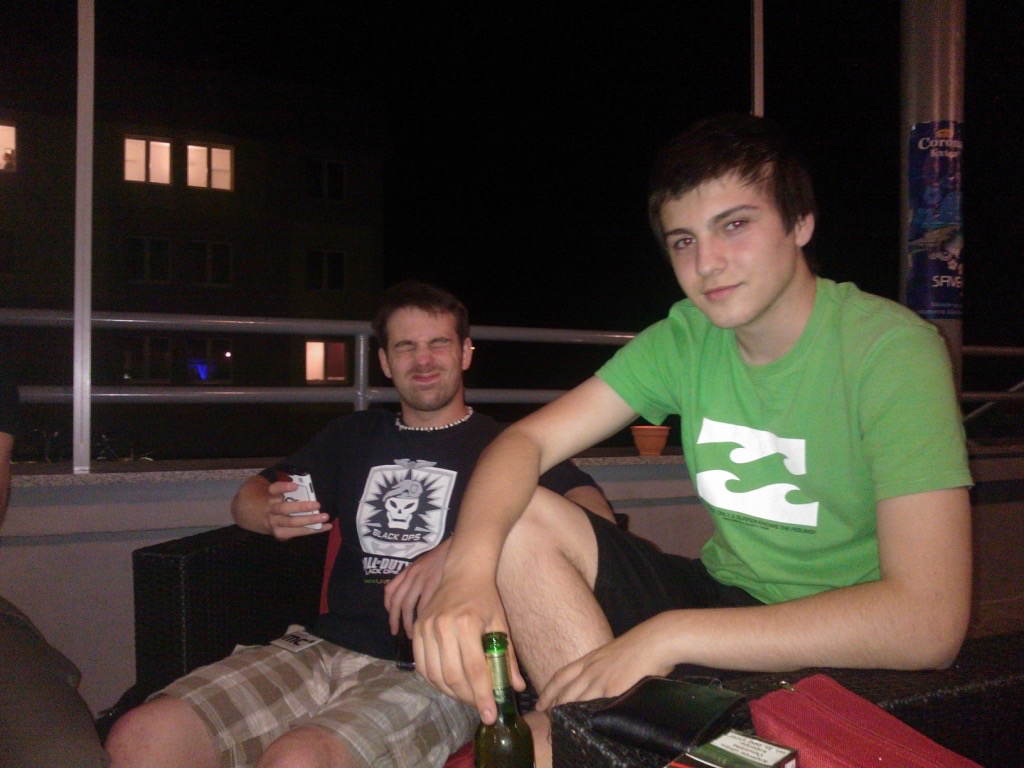 Rudi on the left who I met that day and Luka, a classmate after hacking for 24hrs with much-needed beers. I’m still in contact with both.

5 years ago I worked on a project for a company I previously worked for, and I started to work for a local startup on a SaaS product. Learned a lot on how to work with teams and saw the proper process of delivering a product. I started a BSc of Information Technology but dropped out next year after successfully finishing the first year. 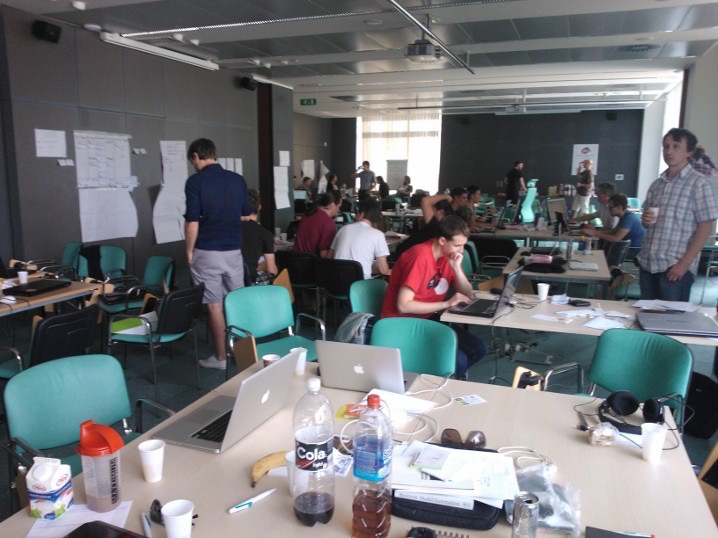 Hackathons are great. Go if you can.

After dropping out of College 4 years ago, I didn’t see myself continuing it, so I decided to look for opportunities abroad. Quite soon I found myself a job in London as a web developer working with my usual web stack PHP, CSS, HTML and Javascript. 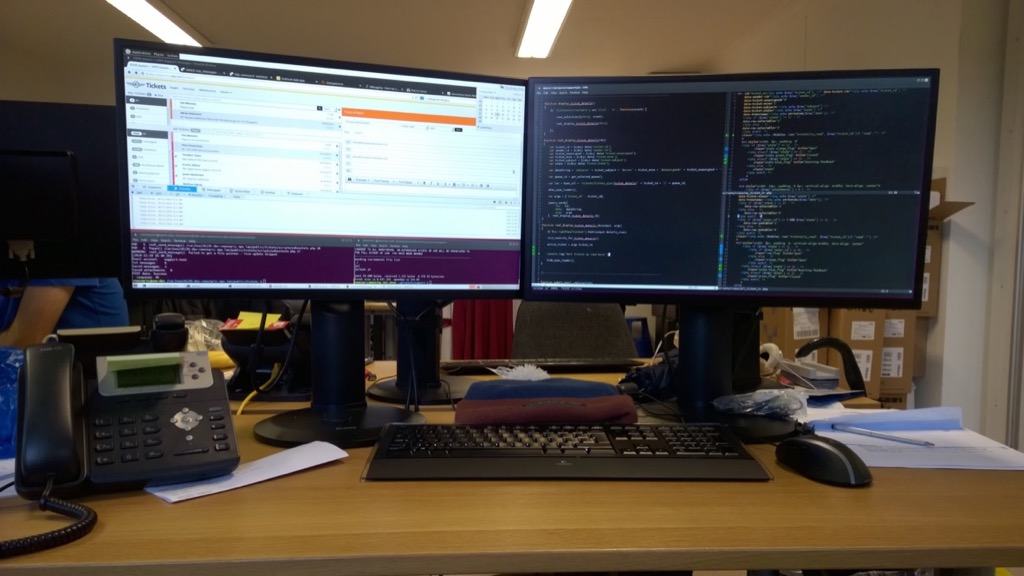 My first workspace at my first job abroad.

I stayed with that company for a few of months until I found myself a job that worked with technologies I was more interested in (Javascript instead of PHP). I was optimising for learning, not for salary, name or position. I think it was the first time I was properly introduced to testing (I wrote some in the past but didn’t fully grasp their usefulness as testing wasn’t integrated with CI/CD process). This was 3 years ago.

After finishing a few projects for that company (2 web-based projects, 1 react native), it was time for another challenge. I started with contracting. Initially for the same company (so I figured out how everything worked) and then I proceeded to look for something different. I figured it was time to be part of a bigger development team and learn from there, as I mostly worked for startups with small teams before. I also started learning Elixir 2 years ago.

Last year as I continued to contract and work with most senior people so far, I also worked on a side project which I later tried to turn into my own company with a proper team, but this time I think it failed due to miscommunication with me and my co-founder. Lots of lessons learned there and certainly deserves a chapter on its own. Note: this is just one of many experiments that failed, but this one was the first one where I decided to turn it into a proper company.

This year, 2018 marks 10 years since I started web development. I work for a company that makes a product I initially thought of 10 years ago but couldn’t execute it, meaning I work on something I consider a product of my dreams. It’s dope, and I love it.
I’m looking forward to 2019 and the challenges it brings.

[1]: Thanks to Professors Zoltan S. and Marjan Č. for inspiring me to try Linux and teaching me a lot about it
[2]: Thanks Nadja J. P. for organising the trip/abroad internship
[3]: Many thanks to both Gregor and Jernej of Motiviti as well as guys at Relief for taking me.